Sapien make some great tools and this is no exception. PrimalForms Community Edition is a Free version that has limited functionality.

I've used this for several OSS projects and it covers the essentials. The link on Sapien sites no longer works so below is a alternative link I've found. This version is 1.0.9.0 but an version 1.0.10 was released also according to the blog. Only obvious change is it adds a start page. 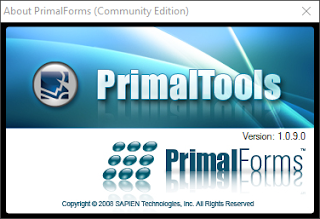 Update: Unfortunately Sapien or one of their representatives has mistakenly slapped DMCA on this link for the free edition and I've removed it, rather than fight it.  You can certainly find it via Google or ask the right person ;-)

Rob
Rob Ardill is a long time (80's) computer enthusiast and IT consultant, working at several US startups and also various levels of government. Rob specialises in SME level technologies from major vendors and was an earlier adopter of Google Workspace (formerly Google Apps/G Suite). He joined the PE program in 2009 and is one of the longest serving PE's, specialising in Google Workspace. Rob lives in the southern wine region of Adelaide, Australia and motorcycles, plays soccer and runs LANTastic LAN parties in his spare time.
Newer Posts Older Posts Home
Subscribe to: Posts (Atom)